While thin and light gaming laptops are the top favorites these days, there’s still a market for the mid-sized desktop replacements of yore – and the MSI GL65 Leopard 10SFK-062 uses that premise to take things to the next level. MSI spearheads both the thin and light weight gaming environment in the MSI Stealth line, but with the Leopard 10SFK-062, they have allowed it to carry some weight to accommodate more gaming power and gaming swag than anyone could possibly handle.

It brings immense power in an understated yet attractive package unlike never before, particularly the per-key RGB lit SteelSeries keyboard, a 144Hz IPS display, High-res audio, Nvidia GTX 2070 GPU and, of course, a 10th Gen. Intel Core i7-10750H processor. This is a strong configuration that will see you through high-end gaming as well as intensive productivity work without breaking your bank.

The GL65 Leopard shares its basic design with MSI’s pricier , only that our review unit comes with a few curves on the lid. The two even share dimensions, at 1.1 x 14.1 x 9.8 inches. Though not as slim as the Asus Zephyrus or the Razer Blade 15, this notebook is hardly chunky. For the display bezels, they come as this as they get.

On looks, the 10SFK-062 sinks into the gamer cliché with its red-and-black color scheme. Most of the red comes from the few accents on the chassis, and above that, the overall look on this machine is conventional, except for the MSI gaming logo on the lid (passively backlit by the screen). Even with the understated looks, it won’t be mistaken for anything but a gaming laptop. 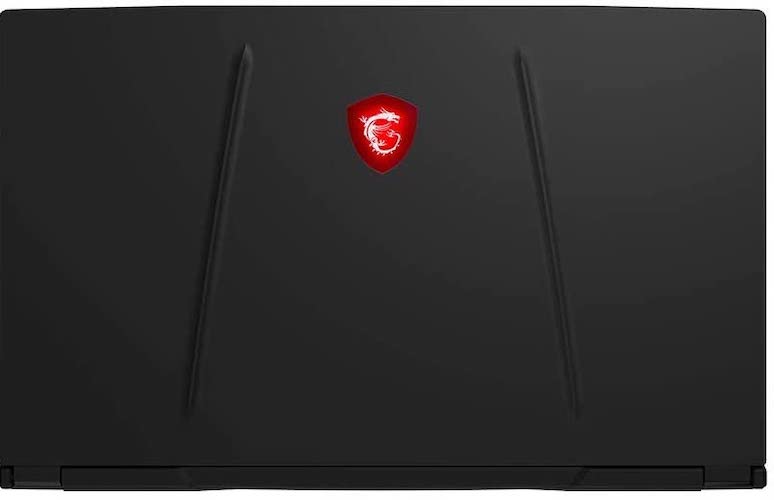 The MSI’s ports are located on its sides – not so ideal, though. The good selection makes for the positioning inconvenience, however. On the left side, you have an Ethernet jack, HDMI and mini DisplayPort video outputs; USB 3.2 Type-A and Type-C ports; and separate headphone and microphone jacks.

The GL65 packs a display that a value-oriented gaming rig should be. In addition to its 1080p resolution that’s just right for gameplay with the GeForce RTX 2070, but gameplay is enhanced by its bright and colorful picture, anti-glare surface and IPS technology that offers wide viewing angles.

The panel’s refresh rate is 144Hz often supported in deluxe gaming screens, and that really counts for a lot. Outside of some less demanding esports titles, the RTX 2070 is definitely going to push beyond 60 frames per second (fps) in modern games. 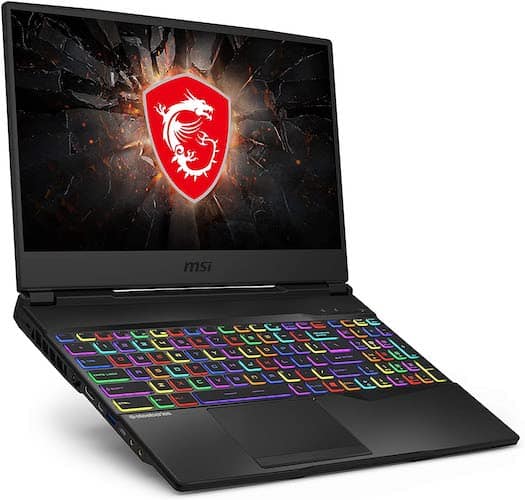 MSI sells upscale models in the GL65 line with per-key backlighting, and that’s the main highlight here. It does look familiar if you’ve used an MSI gaming laptop recently, with a pleasant rubbery feel and enough key travel. As for the layout, the left-side Windows key is missing, instead, you have the preinstalled MSI Dragon Center utility that lets you swap its functionality with the Fn key to the right of the space bar.

There’s a dedicated button at the top right of the keyboard that launces the Dragon Center, and next to it is a power button and another to engage maximum fan speed. The keyboard is designed in conjunction with peripheral maker SteelSeries, and that means yu have extra software support to adjust your gaming profile accordingly.

The GL65’s spacious touchpad is located on the left of the touchpad. It’s marred only by its overly loud button clicks, otherwise it works just fine. Occasionally, you may find yourself tapping on the pad to click in order to avoid the noise.

It lacks built-in biometric features, a drawback it shares with many other gaming laptops. At least the MSI GL65 Leopard 10SFK-062 measures up when it comes to its 720p webcam, which offers decent picture in the right light. On the audio side, the MSI’s pair of high-resolution speakers offer quality sound output, but they can’t entirely replace a pair of quality headphones. 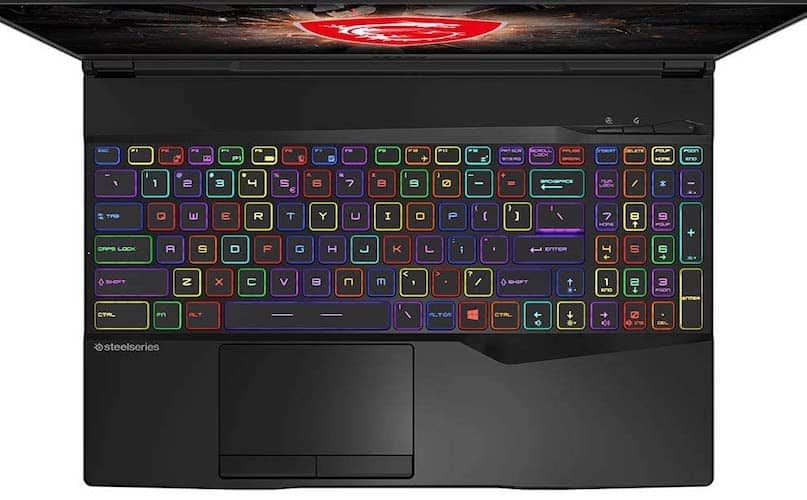 Surprising no one, the MSI GL65 Leopard 10SFK-062 is a performance beast. This thing is packed with the latest 10th generation Intel i7-10750H processor and RTX 2070 graphics on top of the 16GB of RAM and 512GB SSD storage. You’ll keep trying and trying, and nothing truly slows this laptop down. Even when playing Battlefield V at max settings and a dozen of Chrome tabs running in the background, the MSI GL65 doesn’t so much show a hiccup.

And because this is an RTX-powered laptop, you won’t be able to live with yourself if you don’t turn on the juicy RTX features. Both Battlefield V and Shadow of the Tomb Raider are totally playable with their ray-traced features maxed out. We regularly see 80-plus fps in Battlefield V with these features, which means high refresh gaming is totally possible with these features – at least at 1080p. Shadow of the Tomb Raider does quite fare quite as well, averaging 94 fps, and that’s pretty much to shale a stick at and 100% playable.

At this level of power, the MSI GL65 Leopard could easily do function as both a hard-core gamer’s gaming powerhouse and a creative professional’s workstation. As said earlier, the just okay 1080p display supports the laptop significantly in delivering some incredibly smooth gameplay in the latest titles that utilize Nvidia’s ray tracing dynamic lighting technology.

Like most (in fact all) gaming laptops, the 10SFK-062 inherits the same short battery life from its predecessors. Whether you’re playing your favorite game or watching a 1080p video, the 6-cell 51Whr battery won’t last over 5 hours 31 minutes on a single charge. These numbers put this laptop much more behind competing thin and light gaming laptops, which been long overdue.